French: Musee Canadianpour les droits de la person) is the Canadian Crown corporation's national museum Winnipeg Manitoba. This museum is located near The Forks The purpose of the museum is to "explore the subject of human rights with a special but not exclusive reference to Canada, to enhance the public's understanding of human rights, to promote respect for others and to encourage reflection and dialogue." The CMHR, which was created by Bill C-42 (an amendment to The Museums Act of Canada), opened in 2008. It is Canada's first ever national museum. The Museum had its official opening ceremony on 19 September 2014.

Friends of the Canadian Museum for Human Rights, a charitable organization that attracts and maintains all forms of philanthropic support for the Museum.

Izzy Asper Canadian lawyer, politician, and founder of the now-defunct media conglomerate Canwest Global Communications is credited with the idea and vision to establish the CMHR, having first come up with the idea on 18 July 2000 to build the museum.

Asper had hoped that it would serve as a learning center for students all across Canada about human rights. The opportunity was to revitalize downtown Winnipeg as well as increase tourist to the area. Asper also believes it will help to promote understanding of human rights and respect others. Asper worked on his plan for 3 years and was assisted by Canadian museum professionals to conduct a feasibility study.

Asper created the Friends of the Canadian Museum for Human Rights (a private charitable organisation) in 2003 to construct the CMHR.

On April 17, the 21st anniversary of Canada's Charter of Rights and Freedoms , an event was held at The Forks in Winnipeg where Asper first publicly announced the intent to create the CMHR. The Asper Foundation announced the event as a partnership with Canada Manitoba's governments. Jean Chretien also donated the land. The Friends of the CMHR then quickly managed private fundraising.

Izzy Asper, 71 years old, died unexpectedly on October 7th. He was on his way in Vancouver to announce the architectural contest for the CMHR design. His family, along with The Asper Foundation, continued to build the museum. Gail Asper, Izzy's child, was now leading the effort. Two weeks later the ceremony of sod-turning took place at The Forks. The architectural competition was announced. 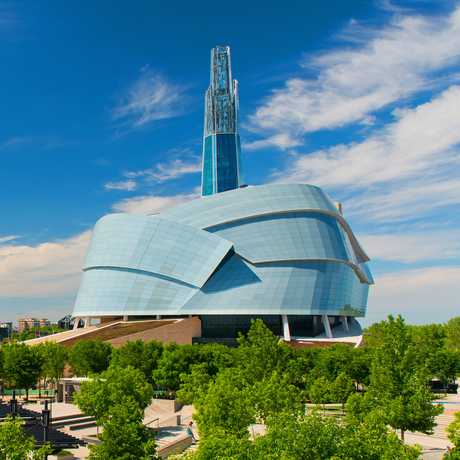 The Government of Canada announced on 20 April 2007 that the CMHR would be made a national museum. The Canadian Museum for Human Rights was created by Bill C-42 (An Act to amend and make consequential amendments the Museums Act), royal assent Parliament on 13 March 2008.

Canadian Museum for Human Rights, November 2011 By the middle of 2008, a government-funded opinion research project had been completed by the TNS/The Antima Group. The report was based mainly on the focus groups participants and listed the following items: key milestones and achievements in human right in Canada; ongoing debates and commitments to human rights in Canada; events that Canada had shown betrayal of human rights.

In consultation with Elders, archeologists carried out extensive excavations. They found over 400,000 artifacts within the ancestral lands. Official construction began on the site in April 2008. In the beginning, construction was scheduled to end in 2012. The chair of the board resigned before his term was up, and a new interim chair was appointed.

Queen Elizabeth II personally chose a Runnymede stone to be the Museum's cornerstone. This stone, which was found in an English meadow, where Magna Carta was sealed 1215, was inscribed by the Queen with a message and enclosed in Manitoba Tyndall stones. The final of 1,669 pieces of custom-cut glass was installed in September 2012. Within a matter of months, the base building had been completed.

Inauguration of the Museum took place in 2014.

Also in 2014, a stretch of road in front of the CMHR was named Israel Asper Way.

On 20 September 2014, the museum was officially opened. However, activists protested their view that some of their history in human rights were being misrepresented or exclusion from the museum.

Canadian Museum for Human Rights, seen from Provencher Boulevard in April 2014 Funding for the capital costs of the CMHR is coming from three jurisdictions of government, the federal Crown provincial Crown , and the City of Winnipeg, as well as private donations. In February 2011, $310 million was spent on the construction of the exterior and interior of the CMHR. When the museum opened in September 2014 it cost $351million.

To date, Canada has provided $100 million in funding; Manitoba has donated $40million; Winnipeg has made a donation of $20 million.

Gail Asper and the Friends of the Canadian Museum for Human Rights have collected more than $130,000,000 in private donations across Canada towards a goal of $150M.

Private sector pledges included $4.5 million from Manitoba's provincial crown corporations and $5 million from Ontario. The Canadian Museum for Human Rights requested $35 million more federal funding to help cover its shortfalls. The City of Winnipeg gave $3.6million to the CMHR as a grant in lieu of tax.

operating budget is provided by the government of Canada, as the CMHR is a national museum. It is estimated that $22million annually will be spent on operating costs. The CMHR reported in December 2011 that the construction costs of the museum's interior exhibits had risen by $41 million, bringing the new cost to $351 million.

By combining a federal loan with a provincial loan guarantee, both the federal government and the provincial governments committed to increasing capital funding of the CMHR by as much as $70 million in July 2012. This newest funding was essential for the completion of the interior exhibits so that the museum could officially open in 2014, already two years behind schedule.

Friends of the Canadian Museum for Human Rights initiated an international architectural design competition for the design of the CMHR in 2003. 100 submissions from 21 countries worldwide were submitted.

The judging panel decided to accept the design of Chris Beccone (Architects from Albuquerque New Mexico) His vision for CMHR was a journey that began at the bottom and ends with a descent in the earth, where visitors will enter the CMHR via the "roots" portion. Visitors are led through the Great Hall, then a series of vast spaces and ramps, before culminating in the "Tower of Hope," a tall spire protruding from the CMHR.

His quote was: "I am often asked about my favourite building, ….." "This building is my favorite, and I am going to record it right now. Predock's inspiration to design the CMHR was the Canadian landscape, open spaces and First Nations peoples, along with the rootedness for human rights action. The CMHR can be described as follows:

Canadian Museum for Human Rights has a deep roots in humanity. It makes visible the commonality of all humankind through its architecture, a symbol of the apparition of stone, clouds, and ice set in sweetgrass. Carved into the earth and dissolving into the sky on the Winnipeg horizon, the abstract ephemeral wings of a white dove embrace a mythic stone mountain of 450 million year old Tyndall limestone in the creation of a unifying and timeless landmark for all nations and cultures of the world.

Looking out from the Canadian Museum for Human Rights' top floor, you can see downtown Winnipeg. This building had been completed by the end 2012 The foundation of the CMHR was completed in 2012. Medicine bags made by Thunderbird House elders were inserted into holes for piles or caissons as a sign of respect for Mother Earth. The CMHR website had two webcams available for the public to watch the construction as it progressed.

Construction of the Hall of Hope with its illuminated alabaster ramps was a massive undertaking that involved more than 3500 m2 of construction material and over 15.000 tiles of Alabaster.

The CMHR worked with exhibit designer Ralph Appelbaum Associates (RAA) from New York to develop the inaugural exhibits of the museum. RAA suggested that galleries within the CMHR will focus on various subjects, such as the Canadian human right journey, Indigenous human rights concepts, Holocaust and current human rights concerns. RAA worked closely with the CMHR's research team to create the first exhibits.

Yude Henteleff, a lawyer, was elected to lead the museum's content advisory panel, which is made up human rights leaders and experts from Canada. This committee played a crucial role in the first major public engagement campaign by the museum.

CMHR researchers went on a cross-country trip from May 2009 to February 2010, called "Help write the story of Canada's Museum for Human Rights." They visited 19 cities, and spoke to thousands about their experiences with human rights. Lord Cultural Resources, Toronto based, conducted the consultation. A story by CBC TV Manitoba (Manitoba), on 5 March 2013, mentioned a document called "Gallery Profiles", dated 12 September 2012. This document confirmed certain of the CMHR’s suggested contents. Canadian content occupies the museum’s largest gallery, but all of its galleries adopt a thematic approach.

Many agreements were reached between the CMHR and educational institutions as well as government agencies in order to raise the quality and depth and to offer more educational opportunities. It is possible to see a growing list of partners that the museum has had:

Ambassador of the Kingdom of the Netherlands to Canada (Netherlands Embassy)

Manitoba Education (the Province of Manitoba).